The Active Office is now occupied by members of the new Active Building Centre (ABC) team, bringing the building to life and enabling assessment of the building in use.  As you can see from these recent photos, they have settled in nicely! Last week saw the installation of the Virtu PV-T system by Naked Energy, which are being commissioned this week.

As anticipated, these look fantastic and are capable of generating 9.6kWpth of heat and 2.4kWp of electricity. The heat generated by the tubes will be fed into the thermal store and hence reduce the energy consumption of the heat pumps for heating and hot water during the winter months and potentially supply all the heat energy in the spring, summer and autumn. 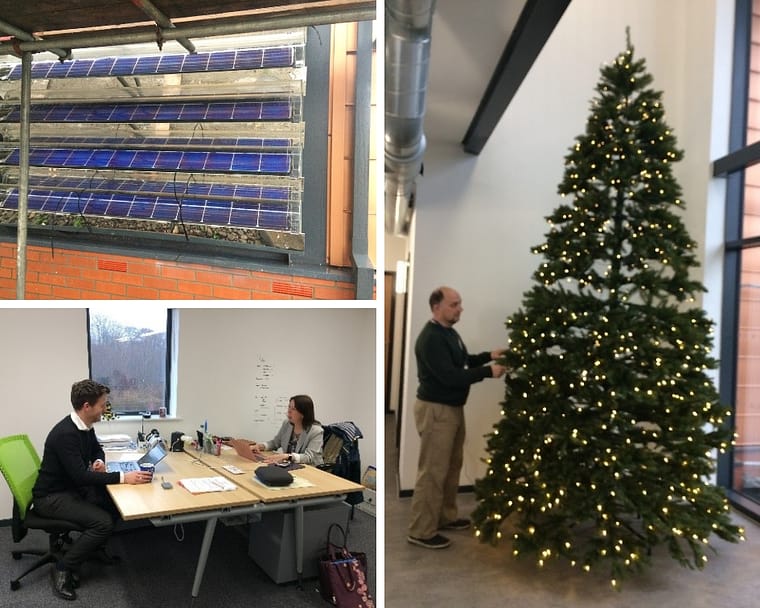 In the first four months of operation, from June to October, the building consumed 7.58MWh of energy, 1MWh of which was used to charge electric vehicles.  Even without the benefit of the PV-T system, during the same period, the building generated 7.65MWh of energy, a little more than consumed.  Based on these figures, we have estimated a rough annual consumption of 20MWh and annual generation of at least 24MWh, achieving the energy positive aims of the building.

The extensive metering installed throughout the building enables us to determine exactly where the energy is being generated and consumed.  For example, we have observed some of the equipment installed draws continuous power, e.g. 475W continuous comms power, 9W for the fire alarm panel, and 15W continuous power to each EV charger.  Our smart system will be used to investigate these elements further and look for energy savings at all levels.

Our Smart Systems Engineers have been working with Cisco and their Kinetic Internet of Things (IoT) platform to develop a fantastic real-time display of the building’s energy generation and consumption, which is located in the entrance foyer for all visitors to see. This will be developed over the coming months to include the PV-T system and basic trend information.

In other news, the building achieved an Energy Performance Certificate (EPC) rating of A+ and showed a negative figure for CO2 emissions.  EPCs base the predicted performance of the building on design information.  We will be able to assess the actual building performance and compare this energy rating with the actual energy use over a period of time.

In the new year, work will start to construct five EV parking bays along the east elevation of the Active buildings, for which planning consent has been granted.  The intention is to install five different EV charging points, all with different capabilities, such as Vehicle-to-Building charging, and the ability to communicate with the battery system to co-ordinate EV charging with the battery state-of-charge.  As well as enabling us to evaluate their capabilities, these will be used to charge our growing fleet of EVs.