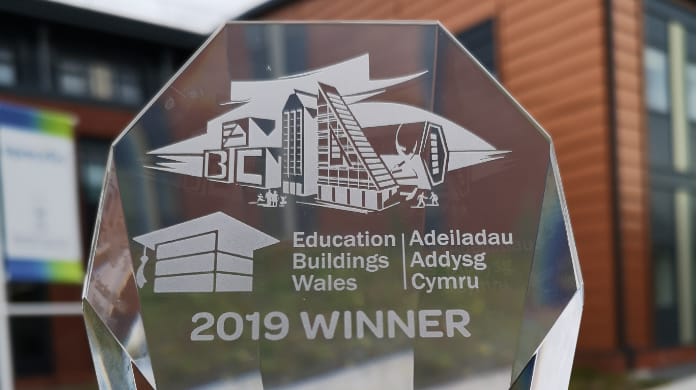 Innovative design and pioneering technology helped Swansea University scoop for a top award for one of its highest-profile new buildings.

The Active Office, which demonstrates the Active Building concept developed by SPECIFIC Innovation and Knowledge Centre (IKC), was officially opened a year ago, and won the Innovation in Delivering a Sustainable Education title at last night’s prestigious Education Buildings Wales Awards; which celebrates excellence and achievement in the design, build, management and maintenance of schools, colleges and universities across Wales.

The building at the Bay Campus was funded by Innovate UK and sponsored by Tata Steel and Cisco. It is a daily example of how to integrate innovative technologies that generate, store and release solar energy and challenges current construction methods. Designed by SPECIFIC, the UK IKC led by Swansea University, was conceived, designed and delivered in just eight months, using off-site modular construction. The office was praised by judges for proving the viability of the Active Building concept, and by proving the case, has helped secure £36m to develop a new Active Building Centre to roll the buildings out on scale.

“This honour is a wonderful way to mark the anniversary of the Active Office’s official opening. This award recognises the efforts we are making in this field and is the result of ongoing collaborations and partnership working. We are thrilled that the judges have chosen to honour us.”