The Future of the Active Classroom: Deconstructability of Buildings for a Circular Economy 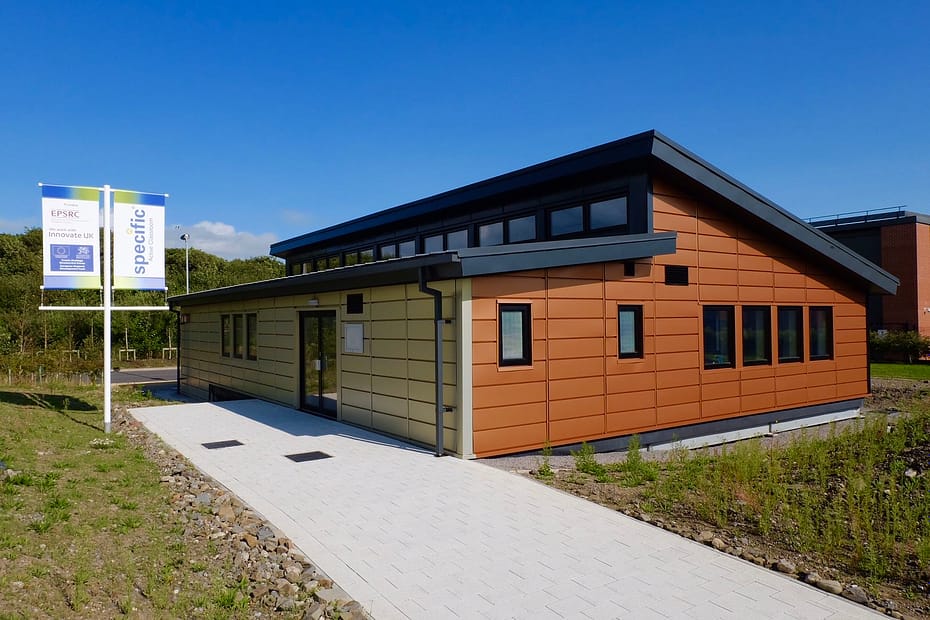 We will soon have to say a fond farewell to our Active Classroom on the Swansea University Bay Campus. But this won’t be the end of its life. Plans are underway to dismantle the building, and find it a new home and a new purpose. Design Manager Dr Jo Clarke explains.

Background: why dismantle the Active Classroom?

With the construction of CISM (Centre for Integrative Semiconductor Materials) adjacent to the Active Classroom, the amount of solar generation via the roof and south facing façade has significantly reduced, and we are no longer able to capture data on the building’s energy generation capabilities.

Since its construction in 2016, the classroom has been occupied continuously, albeit for different activities: it has been used as a teaching facility; as an office for our sister project, SUNRISE; for lots of engagement events; and most recently as a site office for Kier, whilst they build CISM. Kier have provided positive feedback, stating that the classroom has been central to keeping the CISM project on track. Whilst occupying the building, Kier also took part in a trial of Measurable Energy’s smart sockets. This collaborative project between SPECIFIC and Measurable allowed Measurable to test their sockets in a real-world situation and receive feedback.

As well as the loss of generation capabilities, to reinstate the building to a classroom we would need to carry out significant remedial works once Kier have vacated. As the unviersity no longer needs the teaching space, we must instead consider what the next phase is for the Active Classroom.

A 2022 report by the Construction Products Association found that in 2018 the UK produced 137.8 million tonnes of construction, demolition and excavation (CD&E) waste. We do not want to contribute to this waste. Furthermore, simply demolishing the building at this time does not align with our research aims and aspirations, or with Swansea University’s Net Zero target. Therefore, we are seeking a new purpose for the building to continue supporting our research for the next few years.

We originally designed the classroom for deconstruction, as it was always intended to be temporary. The Matrix system selected for the build is demountable in theory and it would be a good exercise to determine how it works in practice. This could provide valuable feedback to Matrix in their continued product development. It will also act as an interesting case study for Tata, to support them in developing reusable cladding systems and to assess the cladding’s condition 6 years after it was initially installed, of particular interest given the harsh marine environment.

Summary of the Active Classroom’s Achievements

The Active Classroom has provided a focal point for SPECIFIC’s research. It has enabled us to demonstrate, monitor, and validate novel technologies and their integration into a building energy system. Partner organisations have used it as a platform to trial their technologies or products, de-risking them before the wider construction industry could adopt them.

When small teaching spaces were hard to come by on the campus, the classroom proved useful. The next generation of Materials Scientists were taught about the very technologies used in the building, enabling them to see first-hand where their research could take them, helping to inspire them in their earlier career experiences.

In addition, the classroom acted as an engagement tool for a wide variety of stakeholders, from government ministers to built environment professionals to school children. Through the classroom, we were able to explain the concept of Active Buildings and prove the technologies work in practice. This is highlighted by the various construction awards the building received. Being able to demonstrate the successful application of the Active Building concept also contributed to winning funding for additional projects, including the Active Office.

The use of the building as a site office for the CISM construction meant that the classroom could remain in use during the lockdown period of 2020 – 2021, when it would have otherwise lain empty, which has been an added bonus for us.

A New Purpose for the Active Classroom

We hope to use the Active Classroom for research into the de-constructability of buildings for a circular economy, and are currently exploring options for its new purpose. These could include constructing a smaller building using its recoverable elements, either within our campus or at another site; and reusing salvaged elements in other projects. The deconstruction will make an interesting case study in itself. Our researchers will be interested in analysing how some of the materials have weathered, for example. Where parts of the building cannot be reused, we will investigate why and whether they could be manufactured differently in future.

Since we built the Active Classroom in 2016, it has served us well as a demonstration of the Active Building concept. Now, we hope it will demonstrate how buildings can be deconstructed and used again, reducing waste and contributing to the development of a circular economy.