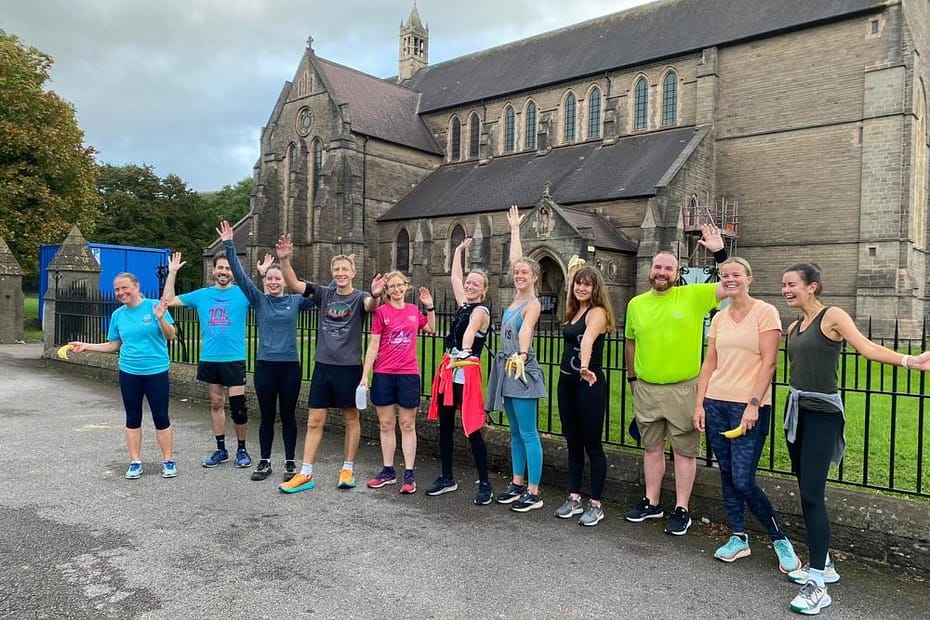 SPECIFIC was one of four Welsh projects highlighted as inspiring examples of how local projects are finding ways to reduce greenhouse gas emissions, make lifestyles greener and to protect residents from the worst effects of climate change – without having to wait for governments to honour their promises. As Governments who met at COP27 last week are criticised for having climate change policies inadequate to limit global warming to 1.5 degrees C, the national charity Carbon Copy is urging communities to take the initiative and develop projects that tackle climate change at the grassroots level.

These projects were four of just 27 outstanding community-led projects selected by Carbon Copy to form the backbone of the Running Out of Time climate relay route when it passed through the UK. It was the world’s longest non-stop relay and thousands of volunteers ran, cycled or sailed stretches of the total 7,767km/4,826mile route from Glasgow to Sharm El-Sheikh where COP27 was held. The volunteers (including teams from all four projects) passed a baton from hand to hand containing a message from young people – signed online by over 800,000 people – calling on governments to provide the resources, skills and quality education that communities need to tackle climate change in their locality.

Five SPECIFIC team members joined in with the relay, starting from the Active Office on Swansea University’s Bay Campus and finishing in Port Talbot, the home of Tata Steelworks. Communications Officer Georgia Bevan joined in the relay because “the message being carried to the world leaders at COP27 was such an important one. It’s a way to add your voice to growing demand for action on climate change. Knowing that you’re running alongside thousands of others from around the world is a great motivation too.”

SPECIFIC was selected because of our work revolutionising the way we design and construct buildings. Buildings emit 40% of the carbon dioxide released by the UK so it’s important to devise methods of making them sustainable. We developed the ‘Active Building’ concept which integrates generating and storing energy, charging electric vehicles, and smart controls to create buildings that are capable of providing heat and electricity for their own needs and more.

Find out more about the other projects highlighted by Carbon Copy below.

Approximately 92% of seagrass in British waters has been lost in the last century yet it provides multiple benefits. Seagrass absorbs carbon dioxide at a faster rate than rainforests and, although seagrass occupies just 0.1% of the seabed, it holds onto 11% of the carbon dioxide buried in the ocean. Seagrass meadows also act as fish nurseries, provide a home for plentiful wildlife and filter pollution out of the water. Seagrass Ocean Rescue has restored two experimental hectares of seagrass meadow in collaboration with the people of Dale in West Wales. The approach is simple – it’s all about underwater gardening. The project is now replicating this approach around the coastline of the UK. More information here.

Organised by Action for Conservation, the Penpont Project is the world’s first large-scale, intergenerational nature restoration project and a blueprint for how youth action and conservation can bring change.

Taking place on a 2000-acre upland estate in the heart of the Brecon Beacons National Park in Wales, the pioneering Penpont Project is led in part by a Youth Leadership Group of twenty 12-18 year olds from diverse backgrounds. Working in partnership with farmers, the landowners, conservationists and local stakeholders, they are restoring habitats and ecosystems and exploring innovative farming and forestry approaches to provide a healthy support system for people, biodiversity and agriculture. More information here.

The Carbon Community brings together trees, science and people. It helps to educate young people about environmental issues, enable people to get involved in tree planting, and run citizen science programmes where people can contribute directly to the scientific research into how trees and soil can soak up and store carbon dioxide.

“These projects are outstanding examples of what communities, companies and partnerships at the local level can and are achieving right now. We want projects like these to inspire other communities and give them the confidence that they can do the same.”

He continued: “Collective local action is too often overlooked in discussions and decision-making about how to address the climate crisis. National projects are too large-scale for the public to get involved and individual action alone is not enough. Community-level action is a vital middle ground where individuals can pool their efforts, knowledge and energy, and together take significant greener and fairer strides quickly.”

As well as this inspiring local project, over a thousand, big-thinking local climate projects have been published on Carbon Copy from around the UK, tackling a wide range of sustainability issues from renewable energy to food waste, sustainable fashion to eco-construction, nature restoration to energy efficient homes.