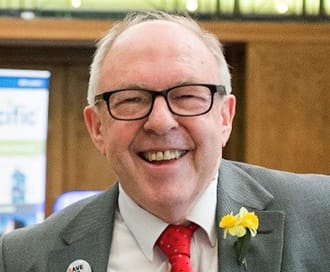 Prof Ron Loveland is a very experienced technologist & senior civil servant. Following several years as Energy Director in the previous Welsh Assembly Government, he was appointed in 2011 as the ‘Energy Advisor to the Welsh Government’ with a mix of path-finding, advisory and ambassadorial roles (local and international) associated with helping to deliver Wales’ low-carbon innovation, nuclear power, smart-living programme (for which he is SRO) and smart grid/local energy objectives on a joined-up government basis.

Prior to holding these positions, Ron was the CTO responsible for advising the WAG on energy, steel, telecomms and business-development policies.

Following an earlier a mix of academic/industrial research (including seminal work on a-Silicon photoconductivity), HSE research and regulation and Whitehall-based industry sponsorship roles, Ron came to Wales in 1986 as head of the innovation and technology (WINtech) operation within the then Welsh Development Agency.

Ron is an honorary professor at Swansea University. He is a Fellow of the UK’s Institute of Physics and an ex-chartered member of the IEE. He participates in the work of many UK and Wales energy and innovation committees including membership of the UK Government’s Energy Innovation Board, Black Start task force and Smart Energy Forum; the UK’s joint Government/Industry energy research partnership (ERP) and the advisory boards of the SPECIFIC, Swansea ‘buildings and power stations ‘; UCL Restless energy-storage: ENA open-networks and Cardiff Uni Flexis future-energy initiatives. He also chairs the board of Sêr Cymru Solar.

Ron is also privileged to have an international dimension to his work – operating for some of the year from a base in Australia, liaising with the Australian Energy Policy Institute and being a visiting scientist at the leading-edge CSIRO solar-energy R&D centre in Newcastle NSW.