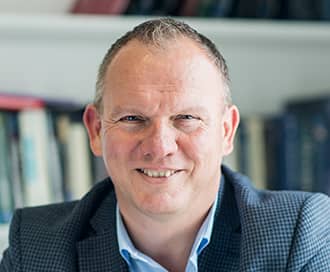 Professor Wilks graduated from Cardiff University (BSc and PhD) in 1988 and 1992 respectively in the field of physics, in particular looking at methods to control the electronic properties of semiconductors junctions relevant to devices developed within the electronics industry. Professor Wilks moved to Swansea as a lecturer in 1994 and was awarded a personal chair in 2000. Over the last 20 years, his research area migrated towards nanoscale devices and sensors, using novel scanning probe methodologies. In 2002, he set up the Multidisciplinary Nanotechnology Centre (MNC) at Swansea and engaged in cross disciplinary work with colleagues in the Medical School, focused on the application of nanotechnology within medicine related to ultra-sensitive diagnostics. Professor Wilks was one of the founding Directors of the Centre for NanoHealth at Swansea, and has published over 100 papers and attracted research income in excess of £33M.

Professor Wilks has an oversight of Science and Engineering activities at Swansea, in addition to cross institutional initiatives related to major externally funded projects, international collaborative partnerships, student engagement, sport developments, creating a healthy University and change management. In order to continuously enhance the performance of the institution, he is leading several change projects to develop and embed: a professional leadership framework, institutional values and behaviours, academic career pathways and a review of the professional service functions.

Professor Wilks also works closely with external bodies such EPSRC, PPARC and STFC, where he is the institutional lead, in addition to Government agencies and policymakers. Professor Wilks is a Fellow of both the Learned Society of Wales and Institute of Physics.