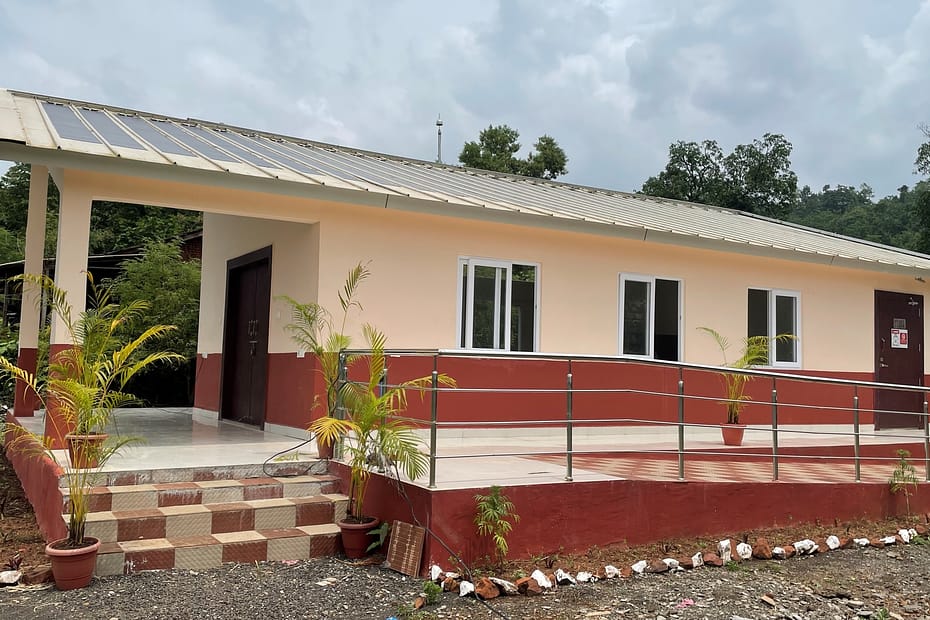 A village in rural India will now get clean, reliable electricity for the first time, thanks to SUNRISE‘s newly opened Active Building, similar to our Active Classroom, which generates, stores and releases its own solar power.

Around 770 million people globally still lack access to electricity. Buildings account for 40% of all the world’s carbon emissions. This new building in India helps tackle both challenges at the same time, generating its own energy for electricity from the sun without the need for fossil fuels.

The building is for the community in the village of Khuded in Maharashtra state in western India. Though Khuded is connected to the grid, its electricity supply is unreliable and expensive. Most residents rely on burning fuels such as kerosene and firewood, which carry a serious risk of respiratory diseases and fires.

The new technology demonstrator– called the Solar OASIS– has been co-designed by the villagers in Khuded, who will share the energy it produces.

Delivered in partnership with Tata Cleantech Capital Ltd, it is equipped with sustainable technologies for lighting and food production, reducing the need to burn fuels.

A reliable electricity supply means residents can charge batteries for phones and lamps. It also powers a rice husking machine, refrigeration unit and flour mill, which residents identified as essential, as many of them earn their living from agricultural produce.

The building has been designed by the Swansea-led SUNRISE network, a Global Challenges Research Fund Project which includes universities and industries from across the UK, India, Mexico, Kazakhstan, and South Africa. Active Building design was supported by our expertise at the SPECIFIC Innovation and Knowledge Centre, which is also led by Swansea University.

The local community in Khuded has been involved in the project from day one. Before any plans were made, the Tata Institute of Social Sciences and local charity Keshav Shrusthi worked with villagers on a survey, drawing up what was needed from the building. Now that the building is open, it will be run by the local community.

An Active Building combines a range of integrated renewable energy technologies, which work together in one system to generate, store and release heat and electricity.

The concept has already been proven to work in the UK, with our Active Classroom and Active Office operating successfully on Swansea University’s Bay Campus.

The new community building at Khuded shows how SUNRISE has adapted the Active Building concept to suit the very different context and climate of rural India.

Features of the Solar OASIS building in Khuded include:

The SUNRISE team have already installed three solar micro-grid interventions for rural communities in India, but the Solar-OASIS Khuded centre is their first full-scale building.

The idea is that Khuded will show that the Active Building concept works in practice in a remote, rural Indian setting, hopefully paving the way for others to follow.

“Active Buildings can play a key part in the Indian government’s National Solar Mission, which aims to establish India as a global leader in solar energy.  They also help to deliver United Nations Sustainable Development Goal 7: sustainable, affordable, reliable, modern electricity for all.”

“Through our work with the local people of Khuded, it became clear that the Solar OASIS needed to provide an adaptable community space. Through a single intervention of a functionalised, rapidly deployable community building, residents will receive not only sustainable energy, but also a space to produce food and partake in economic activities such as making and selling crafts.”

SUNRISE is funded by UKRI through its Global Challenges Research Fund (EP/P032591/1) and the Solar OASIS was supported by Tata Cleantech Capital Ltd through CSR funds.