The team at SPECIFIC has been working alongside the Swansea University Engineering Department and Queen Mary University of London to produce a paper on thermoelectric materials; “Thin Film Tin Selenide (SnSe) Thermoelectric Generators Exhibiting Ultralow Thermal Conductivity.” After two years of hard work, they have made the world’s first thin film thermoelectric generator! Huge congratulations to the team.

Thermoelectric generators convert waste heat into useful electrical energy. In 2014 an estimation of waste heat from industrial sources found that in the United Kingdom alone 48 TWh/yr of energy is lost as heat, this corresponds to around a sixth of overall industrial energy usage.[1] Harvesting this wasted energy could contribute to energy efficiency targets, helping to reduce the need for fossil fuels, causing a reduction in greenhouse gas emissions and helping to tackle climate change. If only 1% of the industrial waste heat could be harnessed, this would equate to a reduction of 0.25 Tg yr-1 of CO2 emissions.[2]

The efficiency of different materials to convert waste heat to useful electrical energy are compared by a factor called ZT. The higher a ZT value the more efficient a material is at harvesting waste heat. In 2014 the record for ZT was set at 2.6 (±0.3) in the single crystal form of the material tin selenide (SnSe).[3] This material was shown to exhibit different ZT values along different directions of the crystal. The record ZT for this material is attributed to the ultralow thermal conductivity of the material whilst still being an electrical conductor.

In this work tin selenide (SnSe) thin films of approximately 1 µm (a thousandth of a millimetre) are made on glass, by evaporating powdered tin selenide (SnSe) by heating in a vacuum. This simple evaporation technique is shown to produce a preferentially orientated porous network of nanosheets. This nanosheet network causes the ultralow thermal conductivity of tin selenide (SnSe) to be reduced to around a third of single crystal values. Simple thermoelectric generators are made with these nanosheets that are shown to harvest electrical energy from heat. These nanosheets are seen to have a high surface area which opens the possibility of using them to make a self-powered sensor. 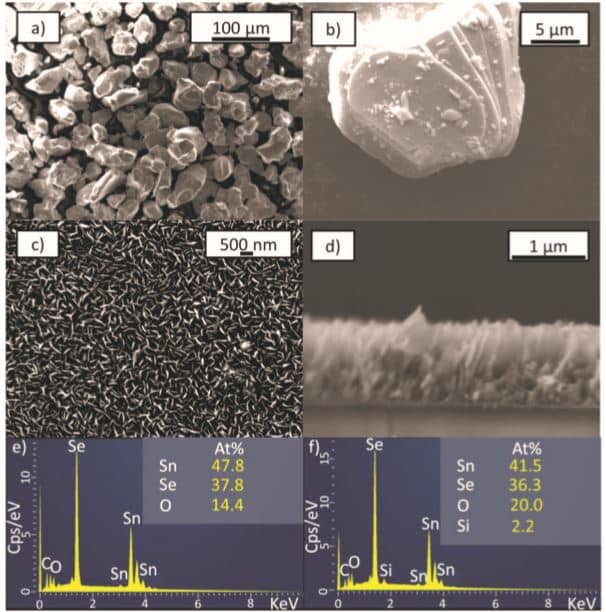